Last week, from the 19th – 21st of November, 2010, I attended the first ever online Astrology conference, put together by the hardworking folks at the International Academy of Astrology (IAA). It was a marvelous experience, so I’ll share a bit with you here.  I won’t go into a lot of astro-jargon or anything, so don’t worry if you’re not well-versed in Astrology. This blog is for everyone.

A logistics note: Since I went to 5 seminars, I’ll break the reviews up into multiple blog posts, so no one of them is too long.

The conference used a tool called GoTo Meeting, which I happened to be familiar with from my work as a technical writer in the high tech world. This tool allows everyone to log into a single website, and then the screen of one person, the presenter, is shown to everybody. So the presenter can show us slides and images and charts, etc.  There were a few technical glitches here and there, but mostly it worked great.  It was an international affair, so there were folks from all over the world attending lectures. (I personally want to thank all the folks from Australia and New Zealand who attended lectures I was in, when it was 3:00am their time!)

I could only afford to go to five lectures, but it was amazing to be able to do that from home, literally while sitting in my pajamas (there was no video other than the presenters’ screens.) Here is a brief review of the lectures I attended:

Erin Sullivan: The Justice of Zeus-The Morality of the Sky God

Zeus, or Jupiter as the Romans called him, is the king of the gods. In Astrology he’s associated with largess, generosity, good fortune, and good feeling. And because kings are the arbitrators of justice in their realms, Jupiter is also associated with morality and justice. But how moral and just was the great king of the Olympians? Erin told us a number of stories from the Greco-Roman mythology that is the basis of Western Astrology, all of which included Zeus/Jupiter engaging in behaviors that we wouldn’t now think of as morally upright. For one thing, he was the king of philanderers.  The gods were very attracted to the intensity of human lives, and Jupiter was sexually attracted to lots of human women, as well as goddesses. Despite the fact that he was married, he sired children with many, many females.  My understanding of Erin Sullivan’s idea is that Jupiter needed to conquer and absorb the feminine principle, as he had so little of his own.  So there were seductions, often with Jupiter shape-shifting into the form of an animal, such as a swan or a horse. 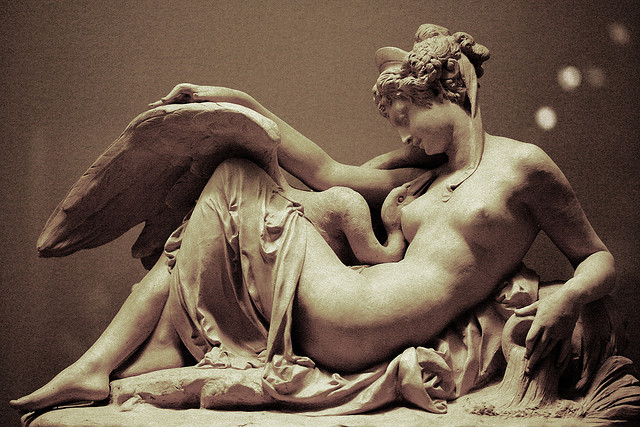 Zeus/Jupiter in the form of a swan, seducing Leda

He even swallowed his first wife, Metis, when he learned she was pregnant, as it had been prophesized that one of his children would overthrow him. She was the goddess of wisdom, and from that odd union sprang Pallas Athena, goddess of wisdom, directly out of Zeus’ head. That is why we think of Jupiter as the god of wisdom and justice. He’s the great king of the sky, but it seems he had to gather lots of his power from the women behind the throne.

I’d never thought about the myths in quite that way, and it was fascinating to think of jolly old Jupiter as not only the giver of fortune and philosophy, but also as a sex addict who needed the feminine traits of others to complete himself.  Makes for a much richer, denser, and more realistic character of the ancient myths.

Now this lecture was just fascinating for me. So let me explain. Most charts are done with planets and luminaries (the Sun and Moon). There are also asteroids—planetary bodies that mostly orbit our Sun between Mars and Jupiter—and some astrologers use some of them.

Asteroid belt between Mars and Jupiter

I grew up using Chiron, an asteroid that was discovered in 1977, in all my charts. Many astrologers also use Demeter (whose Roman name, Ceres, is the name of the asteroid), Pallas Athena, Hera/Juno, and Vesta. I have just begun to study those asteroids and haven’t really used them in charts much. So I was interested in this topic.

Demetra told us much about those four classical goddesses, their stories in the ancient mythology, and their role in astrological charts. But that wasn’t all she talked about. She said that there are hundreds of thousands of asteroids, and to my surprise, thousands of them have already been named. There are famous people names, like Einstein and Plato, and common names like John and Carol. There are geographical asteroid names, like Kansas or Peru. There are human virtue names, like Compassion and Wisdom. And there are hundreds of asteroids named after gods and goddess of every faith. I had no idea…and how would I possibly be able to figure out which ones to use when?

Demetra told us how to find lists of asteroids and their positions. She said that people use the common-named asteroids in synastry charts, which is when you look at two people’s charts and see where they are connected. She said that Prince Charles has the asteroid Camilla and another one called Parker in his chart (for those who don’t know, British Prince Charles finally married Camilla Parker Bowles after years of loving her.)  A woman attending the conference told us that she was born in Peru but lives now in Argentina, and that she actually has asteroids of those two names in her chart in positions of home and travel. Wow!  This opens up a whole new world of astrological interest for me. Time to get Demetra’s books and get studying…

But one other thing about this lecture was mind-blowing to me. I asked Demetra George how long after an asteroid has been discovered does it become useful to astrologers. I know astrologers who won’t use Chiron yet, because they think there’s not enough data associating Chiron’s positions to human behavior to make it a valid entity for chart reading. The answer surprised me: Demetra said that we don’t need data that associates behavior with planetary positions; all we need is to know the story in mythology, and that will give us the archetype that the asteroid represents. We can then interpret the placement of that archetypal energy in the chart. I hadn’t thought that was possible, but from Demetra’s examples, and those of the participants, it became clear that just knowing the mythology (from whatever culture, as long as one understands the mindset of the culture at the time of the creation of the myths) gives us enough to go on. That’s changed my ideas of what Astrology is at a fundamental level, and has opened me up to a larger world of dealing with asteroids. Plus, it gives me an excuse to study the mythology of various cultures and go back to reading Joseph Campbell. Yay!

Renée is a professional astrologer. She has studied Astrology for 20 years, and is currently doing readings in person, via phone, and via Skype. She takes classes at the Centre for Psychological Astrology in London when she can get there, and teaches her own basic Astrology classes in the San Francisco Bay Area. She is the director of the Café Aquarius Astrology Center in Emeryville, CA, and the astrologer in The OptiMystics, a triple guidance reading partnership. Visit her website at OnenessAstrologyWithKi.com.
View all posts by astronée →
This entry was posted in Uncategorized and tagged asteroids, Astrology, Ceres, Demeter, Demetra George, Erin Sullivan, Greco-Roman Myths, Hera, Juno, Jupiter, Mythology, Pallas Athena, Vesta, Zeus. Bookmark the permalink.